According to the prevailing mantra, repeated in nearly every major media format, dietary supplements are completely (and shockingly) unregulated. We have been told that products can be made with no oversight, labels need not accurately disclose the contents of the product, and that outrageous claims of miracle cures are permitted without proof; furthermore, they claim that FDA has no power to do anything about it. The truth is, none of these characterizations are even remotely factual- no matter how often they are repeated.

The latest and loudest critique of the dietary supplement world has come from HBO’s John Oliver, where he ridiculed Dr. Oz’s congressional testimony on his “Last Week Tonight” show, before “exposing” the unregulated dietary supplement industry and the lawmakers he deemed responsible for allowing its deregulation. Whether or not you believe Dr. Oz is good or bad for the supplement industry (or the medical world in general), the ignorance of dietary supplement regulations displayed by Oliver was simply shocking and should be defined as a form of  media malpractice. What Oliver has really exposed is a shockingly unregulated agenda-driven media industry; where humor, rather than truth, feeds the bottom line.

Of course, HBO is not the only offender. Nearly every medical journal editor or medical writer for news outlets permits similar statements to be printed without qualification. Even positive stories about dietary supplements include such statements. When Time magazine did a piece on the use of herbal medicine in the Cleveland Clinic, they included this gem in passing: “The FDA doesn’t regulate herbs and supplements.” A statement obviously written by someone who has never endured a 3-week FDA inspection of a dietary supplement manufacturing facility or read any of the hundreds of warning letters sent by FDA to supplement company owners; or for that matter, has taken the time to peruse the hundreds of pages of guidelines outlining how FDA regulates the dietary supplement industry.

But there appears to be something more insidious going on of late. For years we have had to deal with these unwarranted statements, usually tagged on to the latest adverse event report or “failed” vitamin study (see my blog on editorial bias in research media). However, over the past several years there seems to be an increasing emphasis in these statements targeting DSHEA (the Dietary Supplement Health Education Act) and those in congress who believe it to be a sufficient framework to protect the American people from harm while allow appropriate access to dietary supplements. Oliver went out of his way to point out that it was the massive amount of money used to lobby congress that has led to the shocking lack of regulation. Again, the unregulated staffers on Oliver’s HBO show must have been short on time to do some fact checking, so we will help them out.

According to Opensecrets.org (the same source used by Oliver) the dietary supplement industry’s lobbying dollars reached their peak in 2013 at $3.6 million. How does this compare with the pharmaceutical industry? Well in 2013, the pharmaceutical industry spent over $140 million lobbying congress (the highest amount of all industry sectors). If lobbying dollars equates to deregulation, as Oliver clearly concludes, then he and HBO must have a mini-series in the works exposing Big Pharma. And these numbers pale in comparison to the promotional dollars used by pharmaceutical companies to lobby doctors, insurance companies and consumers. In 2012, nearly $15 billion dollars was spent detailing doctors, including another $5 billion in free samples. When you total all the promotional dollars, including over $3 billion in direct to consumer marketing, the pharmaceutical industry spent over $27 billion in 2012 (an amount equaling 85% of the total revenues of all dietary supplements that same year). Remember that the amount of money spent in advertising by pharmaceutical companies is mostly spent through the same medical journals and media outlets claiming dietary supplements are unregulated- a coincidence, perhaps.

This is such an important topic that when putting together our last book (Supplementing Dietary Nutrients- A Guide for Healthcare Professionals), we specifically wanted to tackle this issue head-on. Not only is there a large chapter on the nuances of dietary supplement quality control and regulatory issues, we were able to reprint the HerbalGram article “Myths of an Unregulated Industry Dispelled” in its entirety (thanks American Botanical Council). This is a must-read for anyone who questions whether FDA has the ability or authority to properly regulate the dietary supplement industry or anybody recommending the use of dietary supplements to others.

Get our new book: Supplementing Dietary Nutrients- A Guide for Healthcare Professionals Today.

Available for Healthcare Professionals at the Lifestyle Matrix Resource Center or directly from our site here.

To get Dr. Guilliams’ earlier book, The Original Prescription– you can purchase directly from the Point Institute , The Lifestyle Matrix Resource Center (professional discounts available),  or Amazon. 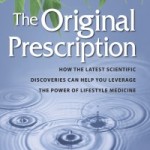 It has been a little while since I have been able to post a new message here on the Point Institute website; I have been busy editing and proofing our latest project, which, I am pleased to announce, is finally at the printer and will be available shortly. 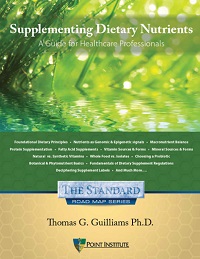 This new guidebook was written as the first in our “Standard – Roadmap Series” (more to come later on this) focusing on the use of nutrient ingredients for dietary supplementation. Using the same sort of approach we have used in developing the Standard monographs since 1997, this guidebook can be used as a training manual or textbook and kept handy for its monograph information on over 30 nutrients. To see a bit more about the details of the book, go here.
As the book is slated to arrive in a few weeks, we are making it available first on our website, and will distribute it here for 20% off the cover price until May 15th (including free shipping in the US). If you want to get your copy, click the Buy Now button below:

They will be sent out as soon as they arrive.
A tremendous amount of work went into this guidebook and we have received great feedback from everyone who has seen the manuscript in progress. We are certain that anyone making supplemental nutrient recommendations within a healthcare setting will want to have this on their shelves.